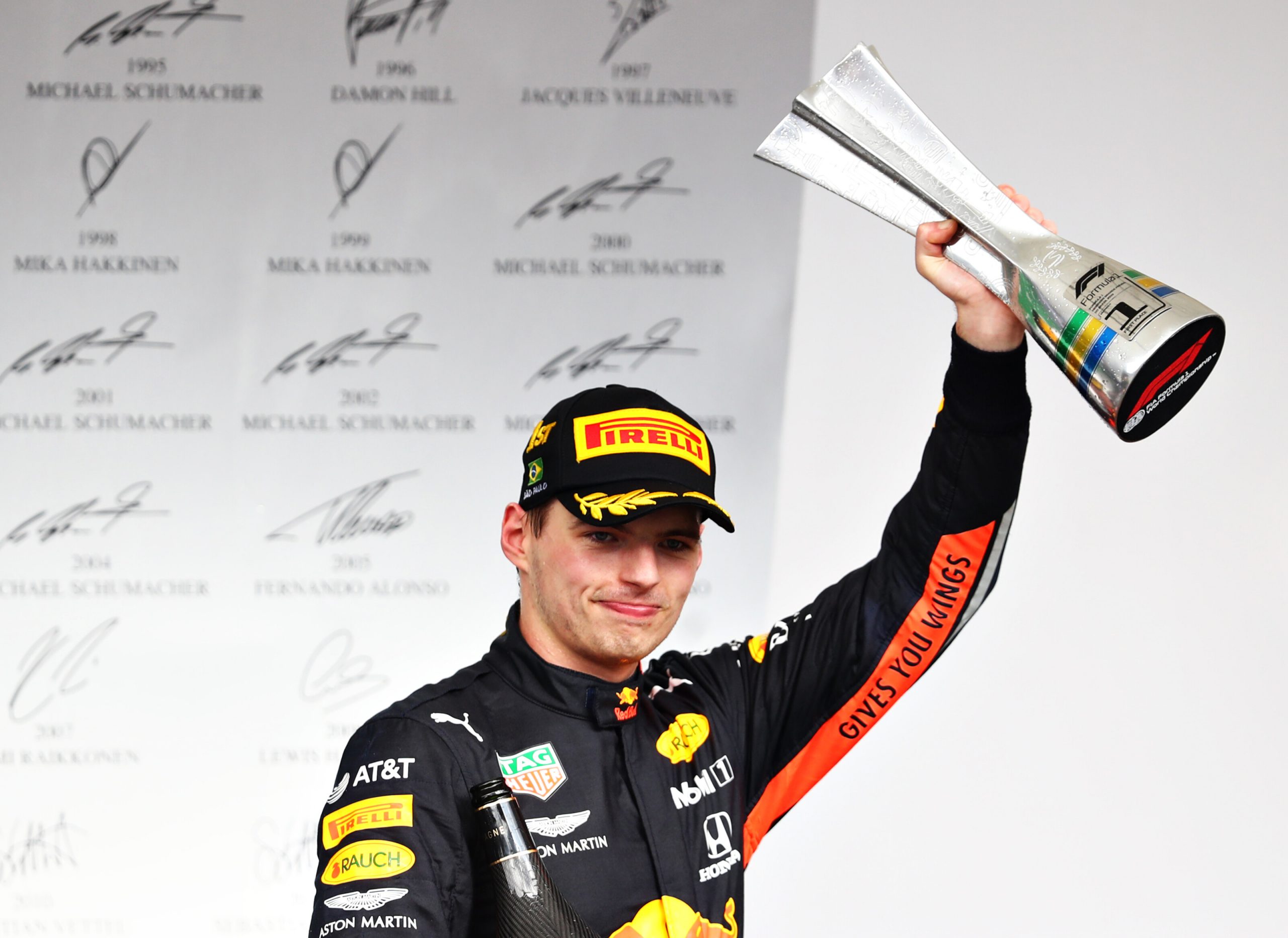 Max Verstappen won the 2019 Brazilian Grand Prix having started from pole. But his victory did not come as easily as that simple sentence might sound, at the end of a race that can truly be described as crazy and was, without doubt, the most exciting Grand Prix of the season.

For the Aston Martin Red Bull Racing driver this was the third win of the year and for a while it looked as though it might have been a Red Bull one-two. It was not, although it was a one-two for Honda because in an incredible final lap, Pierre Gasly finished second for Red Bull Toro Rosso Honda. Joining them on the podium at the end of the 71 laps of Interlagos was Lewis Hamilton for Mercedes AMG Petronas Motorsport, however, after the race, the Englishman was given a 5 second penalty for causing a collision with Alex Albon, thus delivering the most unexpected podium of the season, as Carlos Sainz stepped up to third place for McLaren.

“It’s an incredible feeling right now and to win today was a huge Team effort. It was a crazy race with a lot of action and fighting but luckily we always had the pace to counter back and overtake Mercedes in every scenario. It wasn’t easy out there but the Team made all the right calls, especially at the end to pit for the soft tyres during the Safety Car which gave us the win today. As a Team you always try and make everything perfect, I focus on my job and the Team also try to do a perfect job in the pits and on the strategy and clearly today it worked out pretty perfectly. It’s a great victory, after last year of course, but more for the way the race unfolded and how we all had to work together. Today and the whole weekend the car and Honda power unit have been working really well and we have made a step so thank you to everyone for that. It is of course a massive shame that Alex could not be on the podium with me as it would have been an even better result for the Team but it’s great for Pierre to be up here and for Toro Rosso and Honda,” said Verstappen.

Verstappen never really looked under threat, having started from pole, and a well-executed strategy and brilliant work from his pit crew with tyre changes taking less than two seconds all helped him to control the race. But it was no stroll in the park and with Hamilton attempting the undercut, the Dutchman had to pass the six times world champion on track, not just once, but twice!

As for Gasly, he inherited second place when Hamilton and Albon collided on the penultimate lap, robbing the Thai rookie of his first F1 podium. The French driver kept his cool, placing his Toro Rosso in just the right part of the track coming out of the final corner to win the drag race to the line.

“This is just incredible! My first podium in Formula 1 and with Toro Rosso. I kept working every race on myself, I always thought that if I could be in the right place at the right time something will come, and today it happened, it’s just amazing – I have so many emotions! I’ve always said the team is my Italian family, I love their spirit and passion, they always push like hell and today was the best present I could give back to thank them for their massive constant effort. You dream a lot about being in F1, you dream about your first podium, but then when it happens all of the emotions coming through me are just unpredictable, it’s just the best day of my life right now. I want to send a huge thank you to everyone who has supported me since the start of my career and have gotten me to where I am today,” said Gasly.

At the start, Verstappen kept the lead and Hamilton got ahead of Sebastian Vettel going into Turn 1 to go second. The Mercedes man was the first to pit on lap 20 of 71, attempting the undercut and committing to a two-stop strategy as he again fitted Soft tyres. Red Bull covered the move, bringing Max in on the next lap. The Dutchman nearly got pushed into the pit wall by Robert Kubica in the ROKiT Williams and the delay ensured that Hamilton took the lead. However, the Mercedes man was also delayed, as he was caught behind the Scuderia Ferrari Mission Winnow of Charles Leclerc. That allowed Verstappen to catch up and eventually pass Hamilton going into the Senna S first corner.

The pit stop dance for the leaders resumed on lap 43, when Hamilton again came in trying for an undercut and again Verstappen covered the move next time round to keep the lead. With 18 laps remaining, fifth place Bottas retired his Mercedes with a mechanical failure and that brought out the Safety Car. Verstappen pitted for fresh rubber, but Hamilton chose to keep the lead and stayed out on older tyres. Hamilton backed up the field, hoping to prevent Verstappen getting by, but again the Dutchman retook the lead in the bottom of the Senna S. This was incredibly exciting but there was plenty more to come.

Alex Albon produced an aggressive move to pass Vettel and go third and began to challenge Hamilton for second, but instead the Red Bull man had to defend from a returning Vettel. With five laps remaining, Leclerc passed Vettel at the first corner, but the German fought back and they were side by side on the run down to Descida de Lago. The two Ferraris collided and both had to retire, Leclerc with suspension damage, Vettel with a puncture.

“The overriding feeling today is that everyone, first and foremost our drivers are very disappointed and sorry from a team perspective. It was a small collision that had a big consequence. In truth, this sort of thing should never happen. Our drivers were free to race today and they knew that. We have already clinched second place in the Constructors’ Championship and they were battling for their own positions in the Drivers’ classification. Of course we now need to sit down and decide together where the limits are to make sure we all push for the benefit of the team and make sure these things don’t happen anymore. Our race today was certainly not bad, and similar to Mexico in terms of performance. We are still lacking a bit of pace in the race. Sebastian was in a comfortable fourth, Charles from 14th could have been on the podium. It’s such a shame that we ended up throwing away so many points,” said a disappointed Team Principal Mattia Binotto.

The crash triggered a safety car under which Hamilton dived into the pits yet again, dropping him to fourth behind Albon and Gasly. The Mercedes and the Red Bull collided forcing Albon into a spin, which allowed Gasly past into an amazing second, although it looked more like a dead heat. Hamilton admitted his mistake, which resulted in Carlos Sainz’s promotion to the podium.

For the Woking team today’s result marks an extraordinary achievement, considering that Sainz, who sealed the first podium of his career, started at the very back of the grid after the technical problem that effectively prevented him from taking part in yesterday’s qualifying. The team’s haul of points was also added to by Lando Norris with an excellent eighth place. This was the first time since the 2014 Australian Grand Prix that a McLaren driver had finished in the top three: that time, in fact, it was two of them – Kevin Magnussen and Jenson Button – who finished behind the winner Nico Rosberg.

“Yes! What a day! It’s a weird first podium not being there straight after the race, but I’m extremely happy with our race today. To finish P3 coming all the way from the back of the grid was a big challenge, but we fought until the end with everything we had! It was a very eventful race and I think I was the only car to do a one-stop strategy. It was really difficult to hold the other midfield cars behind after the two Safety Car re-starts, but I managed to defend my position well and took advantage of what happened at the front of the race.

“A good first stint, a great pit-stop from the guys and a very challenging and long stint to bring it home and finish P3 for the first time in my career. Congrats to the whole team, here and back in Woking! My first podium is obviously very special but we need to keep pushing to step up there on pure pace! That’s what we’re really here for, that has to be our goal!” said a jubilant Carlos Sainz.

Behind Sainz came the two Alfa Romeo drivers, with Kimi Raikkonen fifth and Antonio Giovinazzi sixth. This was the best result of the season for the Hinwil team – while for their Italian driver fifth place marked the best finish of his career.

“I am really, really happy today, for both myself and the team. What a great race, it was a fantastic way to celebrate my contract for next year with two cars in the points. We had a great start, the best this year – we made up three places and went straight into the top ten, but we still had a lot of work to do. The strategy was great, the restarts were very important, especially the final one when I was under pressure from Daniel [Ricciardo]. The last ten laps were crazy, it was quite intense but we managed to stay ahead. Everyone in the team did a wonderful job and we can be really happy with our work. We are improving race after race and we can now focus on Abu Dhabi and on finishing the season in the right way,” said a delighted Giovinazzi.

Completing the top ten were Sergio Perez, taking his sixth straight points finish, and Daniil Kvyat. The Russian, who saw his points disappear due to penalties after the chequered flag both in Mexico City and Austin, this time didn’t have any unpleasant surprises!

There was so much on-track action this afternoon – to the joy of the spectators who filled out the grandstands as ever (an attendance of 150,307 over the weekend) – it felt like a grand finale to the year. But that is yet to come, when racing resumes in a fortnight for the 21st and last time at the 2019 Abu Dhabi Grand Prix.