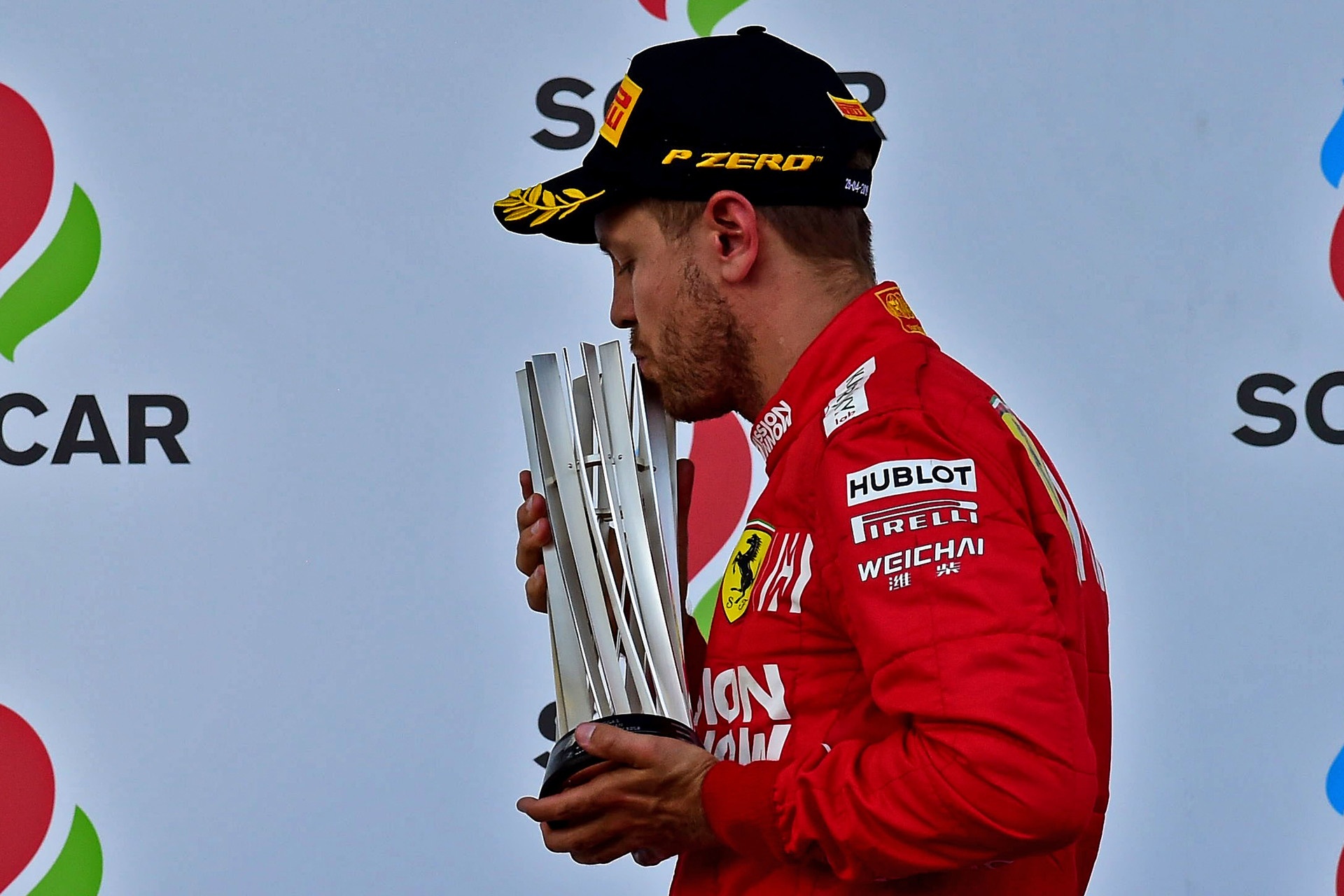 Scuderia Ferrari Mission Winnow leaves Azerbaijan having taken its third podium finish of the season, but with a sense of regret at not getting a better result. Sebastian Vettel finished third for the second consecutive race, while Charles Leclerc, starting back in eighth because of his qualifying mistake, worked his way up to fifth and, at one point even led the race for 19 laps. He also took the point for setting the race fastest lap.

Sebastian maintained his third place off the grid, while Charles, on the Medium tyres dropped from eighth to tenth but, from the second lap began a great climb up the order. He picked off his rivals at the rate of one per lap, despatching them in the order Daniel Ricciardo, Daniil Kvyat, Carlos Sainz, Lando Norris, Sergio Perez and Max Verstappen, to move to third place, by the time Vettel pitted on lap 11. Shortly afterwards, Valtteri Bottas and Lewis Hamilton pitted to go from Softs to Mediums and that saw Charles in the lead.

At this point, the team opted to lengthen Leclerc’s stint as much as possible, in case a Safety Car period would mean the Monegasque driver could pit losing less time and could thus set off in attacking mode for the final stint. The opportunity never arose and Charles came in on lap 34, rejoining sixth behind Pierre Gasly, whom he took one lap to pass.

In the closing stages, Sebastian managed his lead over Max Verstappen, to finish third behind Bottas and Hamilton. Charles was running unchallenged in fifth and therefore on lap 47, he pitted for fresh tyres to go for the fastest lap of the race. He did it, setting a new track record of 1’43”009. It was Ferrari’s 250th fastest lap in Formula 1. The next round takes place in two weeks’ time in Spain.

“That was fun driving today, although not so much in the first stint when I couldn’t get the tyres to work and I didn’t have as much grip as I’d expected. We were not quick and the performance was uneven because I damaged the tyres trying to get them up to temperature and then, once they were there, they didn’t give the performance I’d expected because, they were damaged. After the pit stop I really got a good pace and I had fun because I felt the car was fully under control and I felt free to push, even if it wasn’t enough to put our rivals under pressure. At the restart following the Virtual Safety Car, I set my fastest lap and I managed to get the gap to Verstappen to a second. I think that by then he realised he couldn’t attack me and so I was able to drop the pace a bit in the closing laps. Our pace was alright today, but not good enough. The whole team is working to the maximum and so I feel confident. I believe in this team and I know we can improve. We have a good car, but we’re not using it in the way to get the results we should be getting. It’s like a Rubik’s cube where you have to have everything in the right order. We have a lot of clever people in the team who could solve that puzzle in less than two minutes, but in this case the cube is a bit bigger.”

“We extracted the most we could have done out of today’s race. After the setback in qualifying, I started from P8 on medium tyres. It was a bit tricky in the beginning, because everyone around me was starting on the soft compound while I struggled a little bit to get up to speed. Once I got the tyres up to temperature, I had good grip and the situation improved. We had a strong first stint and were able to gain some positions there. After the pit-stop it became clear that we would not be able to move further up the order, so we decided to stop pushing to save the tyres, pitted for a new set and so I was able to bring home the point for the fastest lap at the end. Overall, it hasn’t been the best weekend but our potential was clearly there and I hope that we will have a much better performance at the next GP in Spain again.”

“Our performance did not live up to our expectations today. Qualifying had not gone the way we would have wanted and, on this track, grid positions make a big difference, as starting further back makes everything more difficult. In the race, there were no Safety Car periods to take advantage of, which might have played into our hands against our rivals. Sebastian produced a solid performance, always close to the two leaders and he fully deserved to finish on the podium. Charles ran a great race, moving up the order, after losing a few places at the start, because it was harder for him to get his Medium tyres up to temperature than it was for those on the Softs. Today, our pace was not good enough and our rivals were faster. We have to go home, identify the areas where we are weak and push in our way of working, to make more aggressive choices to get back to where we deserve to be.”