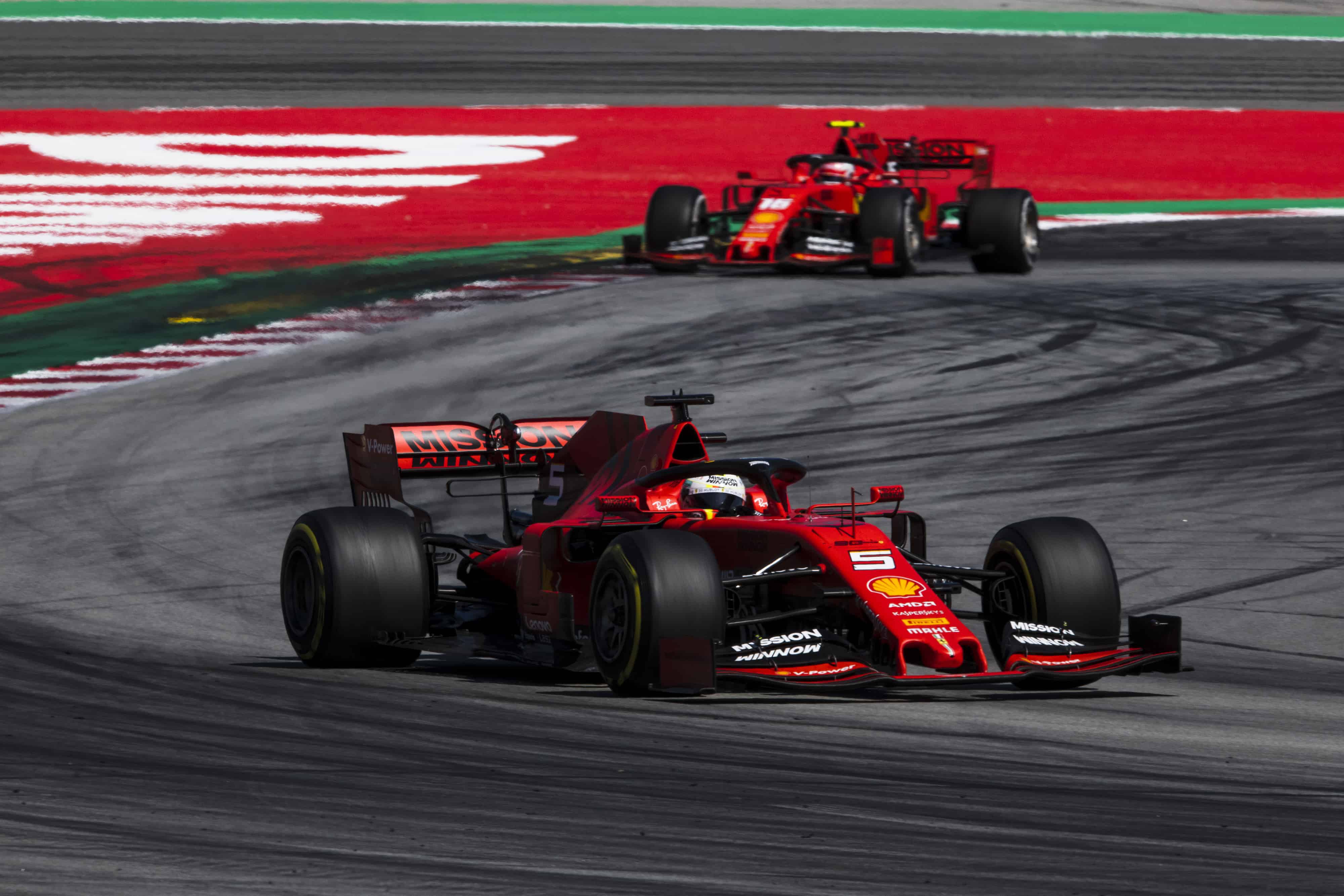 Scuderia Ferrari Mission Winnow leaves the Spanish Grand Prix with a fourth and fifth place finish, which definitely did not live up to expectations. It is an even greater incentive for the Italian team to work flat out during the two days of testing at this same Circuit de Catalunya-Barcelona this coming Tuesday and Wednesday.

Start. Vettel got an excellent start, to the extent that he managed to come round the outside of Lewis Hamilton and Valtteri Bottas at the first corner. But the German slightly locked his wheels, which saw him run wide, letting Max Verstappen slip past. On lap 11, with Vettel struggling having flat-spotted a tyre after the start, he switched positions with Leclerc. The German then pitted on lap 19, fitting the Medium tyres. Six laps later it was Leclerc’s turn to pit and he went for Hards.

Lap 35. On the harder tyres, Leclerc did not have the grip he would have liked and Sebastian soon caught up to him. Once again therefore, the positions were inverted, on lap 35. Five more laps and Vettel made his second stop, taking on another set of Mediums. He came out of pit lane behind Pierre Gasly, but he got by immediately, while Verstappen was also making a second stop, leaving Leclerc in third.

Safety Car. On lap 45, a collision between Lando Norris and Lance Stroll brought out the Safety Car, which meant the team had to change Charles’ strategy, as he would not have been able to fend off Verstappen on the hard tyres, so he was brought in for a set of Mediums, rejoining fifth. In the closing stages, Sebastian was unable to attack the Dutchman and finished fourth ahead of his team-mate.

Test. Scuderia Ferrari Mission Winnow and the other nine teams are staying on in Barcelona for two days of testing with both the SF90s. On Tuesday, Charles will be at the wheel for the team, while Sebastian will be working for Pirelli. On Wednesday, Charles will take over for the tyre supplier, while Antonio Fuoco will drive for the team test.

“Today we more or less maximized our result. It was obviously a disappointing race for us as we were hoping to be a lot faster. After the start, I had a go at the cars in front, but flatspotted a tyre and compromised my own race. You don’t win the race at the first corner, I know, but I thought at least we can mix things up with Mercedes and have a bit more of a fight with everybody. Charles and I tried not to interfere with each other and work together as much as we could. It’s still very early in the season and we are taking it race by race, but I think we can only come back from where we are now as the whole team is working flat out.”

“It was a challenging race. The first stint was quite positive on my side, but then it became more difficult. We wanted to go to the end of the race on the hard compound, but when the Safety Car came out, we realised we would struggle at the restart and so I pitted for a set of mediums. I struggled with the balance on the second and third stints, and lost a bit of confidence with the car. We have a lot of work ahead of us and will push as hard as possible to close the gap to the front. We gathered a lot of data this weekend and will continue to do so at the test next week.”

“This was yet another race that ended well below our expectations. It was a shame about the start, because Sebastian got off the line really well but then he locked up the wheels and lost some places. The decision to split the strategies was taken as the race evolved. Swapping the driver positions round is never easy and we thought we’d done it at the right moment, when we were sure that the one behind had a better pace than the one in front. The updates we brought here to Barcelona, both on the aero front and on the engine, worked well and we are more than pleased with them, but they proved to be insufficient. Now we have to analyse and think about what did not work. And when it comes to that, as of today I don’t think we have a precise answer. We know we have a lot to do and that we must improve. That was made clear this weekend, but we are not losing heart. The mood in the team is still good and there’s a strong desire to do better, so now we have to respond with our actions. Congratulations to Mercedes on what they have done so far.”