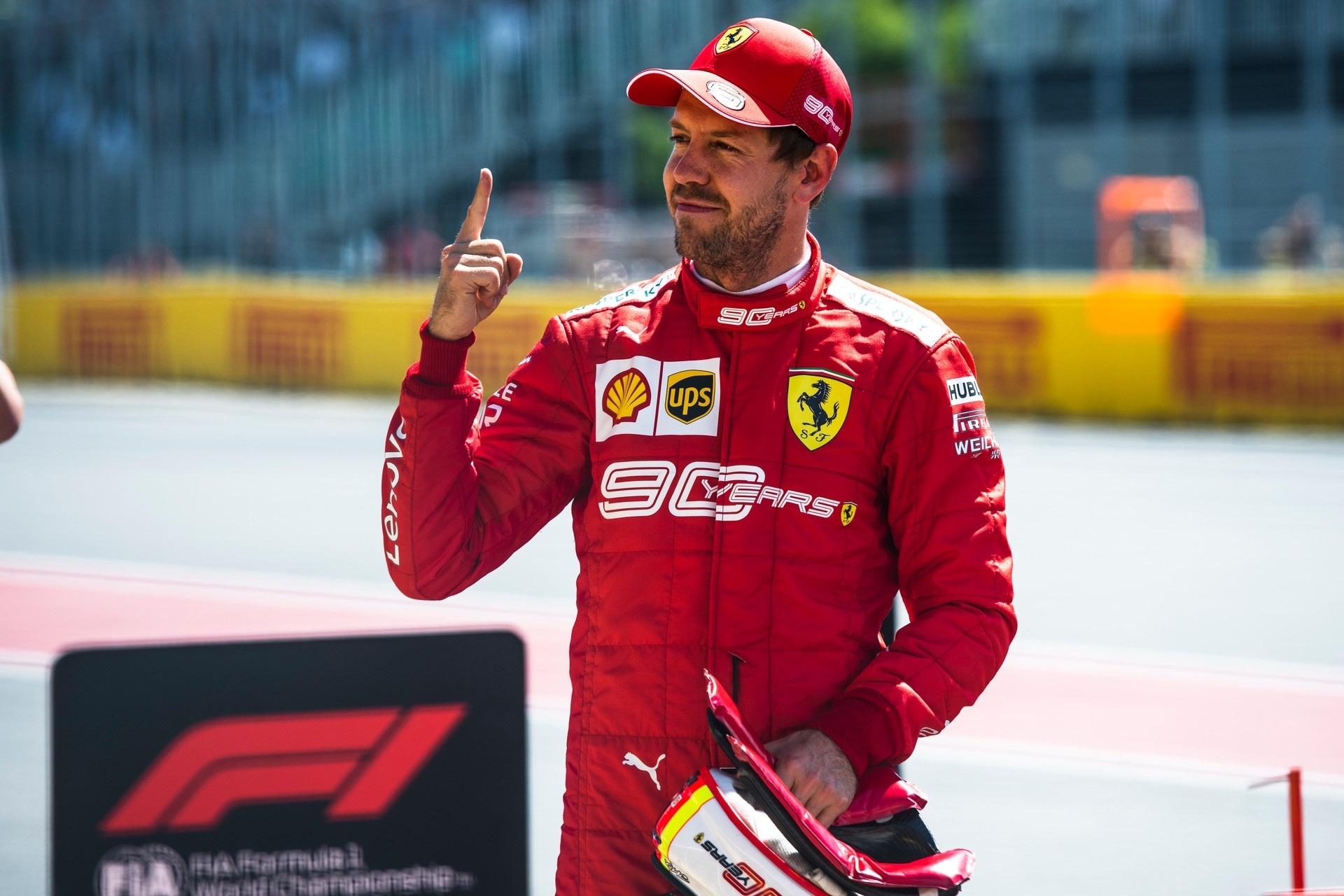 Sebastian Vettel took pole position for the 2019 Canadian Grand Prix, at the end of an action-packed qualifying that provided plenty of excitement and surprises. This was Scuderia Ferrari’s second pole of the season, the 221st of its history. Alongside the German for the start will be Lewis Hamilton (Mercedes AMG Petronas Motorsport) while the second row is made up of the Charles Leclerc in the other Ferrari and, the big surprise of the afternoon, Daniel Ricciardo, giving Renault its best grid position since the French company returned to Formula 1 with a works team.

The front row men, with nine world championship crowns between them, engaged in a fierce battle in Q3. Hamilton was clearly fastest on the first run, almost two tenths quicker than Vettel, but there was almost nothing to choose between them on the other runs. The Englishman improved by just under half a second on his next run, eventually getting down to 1.10.240, but eleven seconds later, Vettel smashed that by over four tenths, setting a new lap record, only just taken by Hamilton, with a lap in 1.10.240.

“That was a good day for us and I’m really pleased for the team. The last couple of months haven’t been easy for us so it’s nice to get a result like today and it sends the right message to all the guys. We are flat out and the most important thing is we keep pushing.

“There’s a lot of adrenaline going around in qualifying and when they came on the radio I was really delighted. It was quite tense in terms of concentration and obviously you try to put everything in that one lap or in those two attempts that you have.

“Coming here, we knew that we would have better chances and we were able to confirm that. Our pace is stronger here and we are basically sure to avoid the soft tyre in the race. We’ll take it from there. Anything can happen tomorrow and we’ll race to find out, as simple as that. We know our competitors are very quick, especially over the distance and we’ve seen this in all the races so far, but we’re starting ahead of them and hopefully we’ll stay there and fight as hard as we can. It is important that the chance was there today and we took it. But now we must confirm it tomorrow. So hopefully more singing!” said Vettel.

Apart from the two champions, only Leclerc got under the 1’11 mark, getting down to 1.10.920. Proving just how close it all was, Ricciardo did a 1.11.071, Gasly in fifth posted a 1.11.079 in the Aston Martin Red Bull Racing and Bottas was sixth with a 1.11.101, the Finn having his worst Saturday of 2019. No doubt even more disappointed was Max Verstappen who never got further than Q2 after he had to abort his final lap when the session was red flagged after Kevin Magnussen hit the “Wall of Champions. Verstappen, like the Ferrari and Mercedes drivers had hoped to get through on the Mediums but when that didn’t work he switched to Softs but never got in his lap, when at least a top four place had looked likely.

“It was just unlucky today and these things happen in Formula 1. We tried to get through to Q3 on the medium but the tyre didn’t feel fantastic for us and with the traffic at the hairpin it didn’t really work out. We then went out on the soft, I was on a decent lap to make it through to Q3 but then the red flag came out and I couldn’t finish the lap. Starting 11th or maybe tenth depending on what’s going on with the Haas will be tricky as I have to clear the midfield before closing the gap to the leaders. That’s how it goes sometimes and you can never predict someone being in the wall. It’s not where we want to start as I want to be fighting the leader, but we should be able to recover our positions and still have a good race,” said Verstappen.

The Danish Rich Energy Haas F1 Team driver’s accident was very spectacular, but fortunately the driver was unscathed. The same could not be said for his car and the team are building up the car around a new survival cell, which means he will start from the pit lane. A real shame for Magnussen as he’d been lying tenth in Q2 up to that point.

A good day for the Renault Power Unit was completed by a seventh place for Nico Hulkenberg (1.11.324) while both McLarens were in the top ten with Lando Norris (1.11.863) ahead Carlos Sainz (1.13.981.) Another driver with a smile on his face on Saturday was Antonio Giovinazzi. The Italian was 13th fastest in 1.11.921, his best result of the year. However, his team-mate Kimi Raikkonen had a day to forget, eliminated in Q1 for the first time since the 2015 Austrian Grand Prix.

It was also a difficult day for SportPesa Racing Point F1 Team, as both its drivers were knocked out in the first part of qualifying. That was particularly disappointing for local boy Lance Stroll, who had already suffered the misfortune of having his new Mercedes power unit go up in smoke at the start of FP3. The Canadian thus had to revert to the older unit he had used for the first six races, but he never got out of Q1. The times in that first session were incredibly close from Sebastian Vettel’s 1.11.200 to 18th placed Lance Stroll, just slightly over second slower with a 1.12.266. Much further back, as so often this season are the struggling ROKiT Williams Racing team. George Russell (1.13.617) finished ahead of Robert Kubica (1.14.393.) A far cry from the day when the Pole took his only Grand Prix win to date at this track way back in 2008.

After such a closely contested qualifying, everyone is hoping for an equally enthralling race tomorrow. The battle between Mercedes and Ferrari seems definitely more open than in recent races, but looking at yesterday’s long run pace from the reigning champions, it seemed very strong. In terms of strategy, Canada is usually a one stop, certainly for Mercedes and Ferrari who can start on the Mediums and thus avoiding the Softs. It will be less easy for others who will start on the softest compound Pirelli has brought here. The Italian tyre experts reckon it will do a first stint of no more than ten laps. It’s one more unknown factor for a Grand Prix that has always thrown up some surprises, not just because of its characteristics but also because of the excitement generated by the enthusiastic fans.