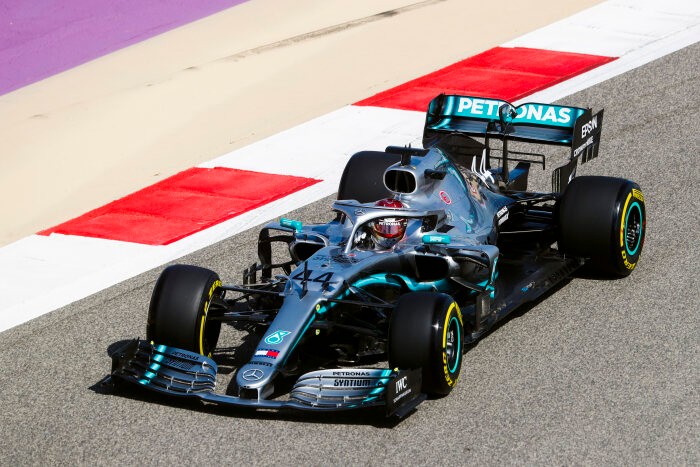 After a successful start in Australia, Mercedes AMG Petronas Motorsport were eyeing a follow-up performance in Bahrain GP but had to be content with row.

With a sixth consecutive championship at stake, Mercedes won’t want to concede too much ground to Ferrari. But the Italian team looked formidable in qualifying.

Bahrain International Circuit has not always been a comfortable environment for Lewis Hamilton and that was the case again as he trailed the Ferrari’s by more than half a second during Friday practice. He closed that gap in qualifying but will have to start from on the grid.

Valtteri Bottas couldn’t maintain his pace from Australia and will start the race tomorrow from the fourth position.

“I really enjoyed Qualifying and it was great to see the progression for us over the weekend. Congratulations to Charles, he did a great job and deserved to get his first pole today. We’ve seen strong pace from the Ferraris all weekend long. We’ve worked very hard to narrow that gap, but they were really fast on the straights and that’s ultimately where we lost a lot of the time today. Our car felt okay today; I think this track has never particularly suited our car in the past for whatever reason, but I think we got it into a quite good place today, so hopefully it feels good tomorrow as well. It will be a very hard race, physically challenging and tough on the tyres, but our race pace was good last year, so I’m hopeful it will be good again this year. I love that it’s a close and exciting battle, that’s really how it should be.”

“P4 is not a very satisfying result, but it’s not a disaster either. I was only a few hundreds off of Lewis and I think Ferrari was just quicker today, so Pole was probably out of reach for us today. Ferrari showed strong pace throughout the weekend, but it didn’t really come as a surprise; they clearly found the solution to the issues they had in Melbourne. We made some good steps forward over the weekend, but they kept the upper hand. However, it’s the race that matters. Our race pace looked quite strong and I think we’re there or thereabout when it comes to the tyres, so the race should be exciting – I think we’re going to be in the fight tomorrow.”

“P3 and P4 is a bit disappointing, but not surprising after the Free Practice sessions this weekend; we were not fast enough to fight for pole today. Ferrari have been quick all weekend so we knew it was not going to be easy and that was how it turned out. We are lacking in straight-line speed compared to them at this circuit, so we have to dig deep and analyse the cause. We start tomorrow’s race from the second row and we think it will be a close fight; our long-run pace looked reasonable yesterday and the tyre management will be key to tomorrow’s result.”

“The morning was quite difficult, the overnight change of wind direction had affected the balance on the car and it took a bit of time for the drivers to get used to that. The cooler track in qualifying helped things a bit but the wind was still strong so it wasn’t easy for the drivers to put together a perfect lap. The session wasn’t very comfortably at any stage, the whole grid seemed very tight and with the track ramp in the first part of qualifying, we were close to having to run for a second time with Valtteri. We saw a good step in grip going into second qualifying and although our first laps eventually put us safe with both cars, we sent Valtteri back out on track as a precaution just in case we had to go for another lap right at the end of the session. It was disappointing in the final session that we couldn’t really challenge for pole, despite being one of the few cars with two new sets of tyres left, but both drivers had a decent go at it. Lewis came very close to knocking Vettel off the front row but that would have been the best we could have achieved today. The race tomorrow will be more about degradation and tyre lives than ultimate pace and we were quite happy with our race work from yesterday. We’re expecting it to be a tough battle but there are a number of strategy options available to us and we will hopefully be able to improve on third and fourth.”